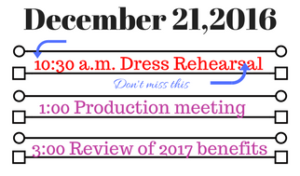 Santa groaned to himself. He hated dress rehearsal. His father had instituted dress rehearsal after one year when there was a problem with his hat. Why he kept up the habit when he became Santa was beyond him. There was so much to do this time of year that taking time to put on his Christmas clothes was, in his mind, a time waster. Mrs. Claus didn’t agree with him so here he was going home at 10:30 in the morning to try on his special clothes.
As he approached his house, he could hear the elves. They were so loud and always singing. When he was in a crabby mood, the last thing he wanted around him were elves. They just didn’t know how to be quiet. He really wanted to just turn around and go back to his office but he knew that Mrs. Claus would have a fit. She had been working for a week to get the clothes ready for them to try on. While he stood there trying to decide If he would rather go in or face the wrath of his wife, the elves started tumbling out from his house. There wasn’t a choice now.
Mrs. Claus knows that he doesn’t like to try his special clothes in advance. She was relieved he came over without a fight this year. She knows that he finds it a waste of time but he doesn’t realize that she must adjust his clothes every year. Granted they were minor adjustments but still. He needs to look his best when he is delivering all those toys each year.

Santa got right to work changing his clothes. Everything was going fine until it got to his boots. 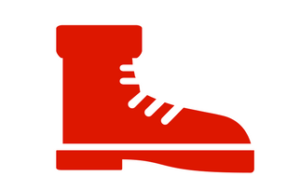 “OUCH!”
Mrs. Claus looked up in surprise. “What’s wrong?”
“Oh, this boot hurts! There must be something inside of it.” He took off the boot and shook it upside down. When nothing came out of it, he put his hand in and felt around the inside of the boot.
“That’s funny. There isn’t anything there.”
“Let me see that.” Santa handed the boot to Mrs. Claus. She looked at the boot, shook it, and felt around the inside just like Santa had just done.
“Try it again.” Santa took the boot from her and tried to put it on. He did get it most of the way on before he grimaced but kept going putting it on.
“Oh, that really hurts.”  Santa removed the boot and just stared at it.
“Let me see your foot” asked Mrs. Claus. “Oh, there is the problem. Look at your foot.”

Santa looked at his foot. “What? You think that lump on my foot is the problem?”

“Yes, that’s the problem. You have a bunion and it looks big. I am sure that with that bunion your foot doesn’t fit in the boot.”
“What do we do about it?”  Santa was not completely sure Mrs. Claus was right but he wasn’t sure she was wrong either.
“We will call Dr. Hussain, our friendly local podiatrist, and let him tell us.” With that Mrs. Claus went over to the phone and called. Dr. Hussain recognized the importance of the problem and said he would come up right away.
The next morning the three of them were looking at Santa’s foot. Dr. Hussain was looking at the x ray of the foot. 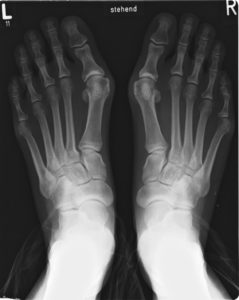 “Yes, you have a bunion and it is pretty big. If you look at this x-ray, you can see that the bones are misaligned. In my opinion, you should have surgery to correct this.”
“If that is the case, can you do it right away? Christmas is a few days away and I have a big job to do.”
“No, Santa, it isn’t that easy. With the surgery, you will need to recover and that can take up to six weeks.”
“But I need to be in my boots and delivering gifts on Christmas Eve.”

“I don’t know what to tell you Santa. You won’t be able to wear those boots to make your deliveries.”

Santa and Mrs. Claus looked pretty upset. Dr. Hussain felt terrible but he didn’t know what to do to help them. Then he had an idea.
“Say Santa, did your father have a bunion? “
“What? Why?”
“Well many times people will have the same bone structure in their feet as their parents. That bone structure will lead to them having bunions.”
“I think he did have a bunion now that I think of it. Does that make a difference?”
“I was just wondering if he had a bunion then maybe his boots were adjusted for it. Do you have the boots he wore?”

“I must go up in storage and check but they should be there.”
Dr. Hussain then gave Santa and Mrs. Claus some instructions for taking care of Santa’s bunion and he left. Santa went back to work and Mrs. Claus went to the storage area to look to see what she could find.
When Santa came home for lunch, he found Mrs. Claus looking very happy.
“Santa, look what I found!”
There on the floor were two pairs of boots. One pair was well worn but the other pair was not. Santa picked up the better of the two pairs and looked at them.
“Oh goodness! Look at these boots.”
Santa found when he looked at the boots that the side of the boot (right where his bunion was) was loose. It looked like it would accommodate his bunion. He took off his slippers and tried on the boot. It fit and with the flap by the bunion, he could wear them and be comfortable.

“Oh, Christmas is saved! Let’s call Dr. Hussain and thank him.”  They made the call and Santa was still so happy and relieved that he spun Mrs. Claus around the kitchen.

“I will never complain about trying my clothes on in advance again.”
“I’ll hold you to that!” They both laughed and settled down to have lunch.
“He sprang to his sleigh, to his team gave a whistle,
And away they all flew like the down of a thistle.
But I heard him exclaim, ‘ere he drove out of sight,
“Happy Christmas to all, and to all a good-night”
Clement Clarke Moore
.

To learn more about Chicago DPM, visit our About Us page or Contact Us Today!